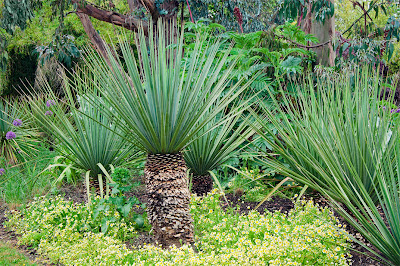 The Plant Delights website, which sells Nolina nelsonii,  describes it as "To quote the redneck pickup line, it resembles a parking ticket, because it has 'fine' written all over it". http://www.plantdelights.com/N/products/806/.  Amen to that. I have grown this plant for at least 15 years, and it has never caused a problem. I grow quite a few of them in my front border, out by the street and they never receive water in the summer, they are never eaten by the deer, and they never suffer in our cold and rainy winters.  I also grow one in the main part of the garden where it lives in a partially shaded area under a native willow tree. It has also done quite well there, although the crown gets filled with willow leaves in the fall and it is a chore to fish the leaves out to clean up the plant so it is presentable.
I grew the plants you see in the picture from tiny, bare root plants which I purchased from Yucca Do Nursery,  www.yuccado.com,  more than 15 years ago. These plants had no trunks and only 3 or 4 leaves. They were planted directly in the ground in the location you see in the picture, and you can see that they did just fine. I had no losses of the ones I planted. Indeed, I have never had a Nolina nelsonii die on me, and I have grown quite a few of them.  In fact, the only regrets I have had about them are that I did not space them out more, and that I did not plant more of them. Spacing of plants is always difficult when you are dealing with tiny new plants that you have never grown before. While theoretically I could move these plants I have never done that and don't intend to do it because I don't want to risk killing them, and they are rather big to move.
One year I found a number of large 5 gal. Nolina nelsoniis at Well Medina Nursery, a very good retail nursery in the Seattle area.  I assume they got them from a Southern California wholesaler. Indeed, I notice that San Marcos Growers, www.smgrowers.com, a wholesaler near San Diego which has a list I periodically drool over, has them on their current availability list. I bought some of those plants from Wells Medina and also planted them in my front border. So now I have 11 or 12 of them. I wish that large ones were more readily available here, because I now have other spots I would like to plant them, but I don't want to plant ones that are so tiny that they don't make their presence felt in the garden for  years.
Aflter gowing these for as long as I have, I conclude that they are great evergreen accent plants for open dry areas. I would not plant them too close to each other, and I would not plant a lot of tall plants around them.  Rather these would look good as punctuation plants in a sea of low lying things like California poppies and various bulbs. The more ephemeral plants underneath them can come and go but the Nolinas will remain as sentinals for year round interest.