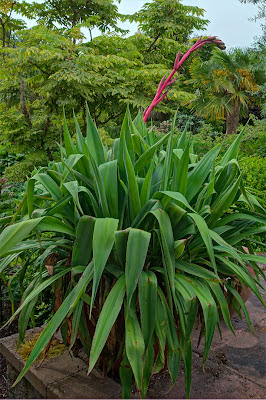 As I promised in my post on Garden sight lines, I am going to tell you about the Beschorneria I have in a pot on my south patio. I got this plant many years ago and I think it was labeled Beschorneria dekosteriana. When I look on the internet, I am told that it is really Beschorneria yuccoides ssp. dekosteriana. That is probably why it is indistinguishable to me from the straight B. yuccoides.
In any event, I got this plant at least 10 or 12 years ago, and it has been growing in this pot ever since. Of course it was much smaller to begin with and had only one rosette. After Beschorneria blooms, the rosette that produced the bloom dies, and it makes offsetting rosettes, all of which will be capable of producing a bloom at some time. In a pot like this, all the rosettes have limited space in which to spread out, so they make this nice full plant. I don't know what this plant would look like if I had planted it in the ground--if it had survived, perhaps it would have spread out more.
This brings me to the point of survival of Beschornerias planted in the ground in our climate. When I first got onto these plants I tried to plant them in the ground in various places in the garden and none of them survived our winters, at least not in any presentable fashion. My take on marginally hardy plants is that if they don't survive our winters looking good, I don't want to grow them because I don't want to have to look at an ugly plant while it struggles to recover from its winter damage.  It's Ok if they die completely to the ground, and then come back, but I don't want to look at some tree or shrub which looks half dead. Did I mention that Beschorneria is evergreen? That's what makes it so amazing that it survives the winter in this pot.
At first, when I had this plant in this pot, I took it into my sunroom to winter over. Then, one year it became too much of a chore to do that and I left it out to fend for itself. Lo and behold, it wintered over with nary a browned leaf! It has now wintered over, outside, with no protection from the elements whatsoever, for probably 10 years.  Even the winter of 2010, where we got down below 10 degrees F. did not significantly damage it. It is my belief that this plant does so much better in pots here because the drainage is better in the pot than in the ground.
This plant, which is from Mexico, is also quite drought tolerant. Although it appreciates being watered and fertilized in the summer, it does not need that. So if you grow this plant, you can go away on long vacations and not worry about it dying for lack of water, even in a pot. The summer I was away from my garden a lot and did not water much, if at all, this plant did just fine, thank you very much.
Beschornerias are now more commonly found in nurseries than they used to be, although you may still have to search for them. Places to get them include Plant Delights, Cistus Nursery (a great nursery on Sauvie Island near Portland), and Dancing Oaks, another great nursery near Monmouth, Oregon. Monrovia lists Beshorneria septentrionalis in their catalogue, which, again, to my mind is not much different that B. yuccoides. Beschornias are also easy to grow from seed and I have even had them self sow in my pink gravel pathways.
So, if you are looking for an easy care pot plant that stays nice looking all year round, that is low water use, and that produces flowers that the hummingbirds love, then Beschorneria is for you.